This enables the simulation environment to be expanded which combines realistic whole vehicle behavior, the many model integration options and the sensor modeling of CarMaker with the traffic behavior model of PTV Vissim and the included traffic signal control.

Virtual test tracks including lane, line and road elevation profiles can be generated as ROAD5 files using the Scenario Editor and can be converted to the data format for PTV Vissim using the converter included in the package. The configuration of the traffic and traffic signals is subsequently carried out in PTV Vissim. The positions of the traffic objects from different object classes (including cyclists and pedestrians) are transferred to CarMaker, enabling the virtual prototype to constantly interact with the modeled traffic objects in complex traffic scenarios.

Particularly the stochastic traffic option is especially suited to thoroughly test driver assistance and automated driving functions with virtual test driving. In addition, variations of traffic density can be generated, for instance to analyze real driving emissions. CarMaker’s interfaces allow for the control of a test automation of both programs, thus also enabling the automated variation of parameters in PTV Vissim using the Test Manager, for instance.

The package including the interface, road converter and some examples is compatible from CarMaker 7.0.2 and can be used with the PTV Vissim versions 9 and 10. 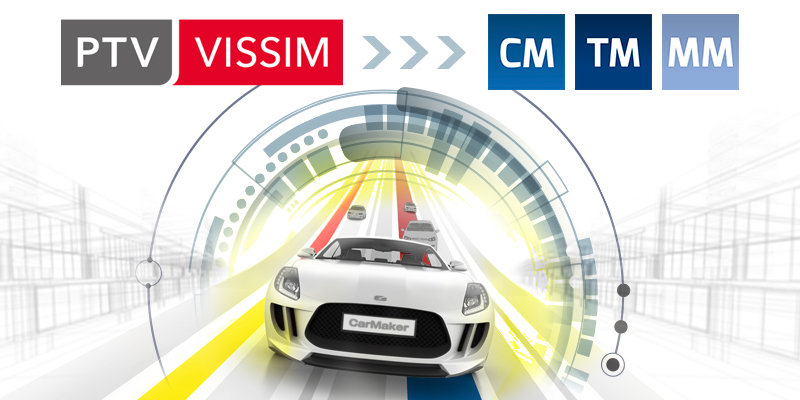