Virtual testing, real driving: That was Formula Student 2017 in Germany

The second week in August on the German racetrack Hockenheimring was all about powering through despite the rain at another instalment of the Formula Student competition which has been held in Germany since 2006. At this year’s race from August 7 to 13, a total of 115 Formula Student teams presented their vehicles. Roadworthiness, design, project planning – a variety of evaluation criteria needed to be fulfilled.

This year’s new chance to win

For the very first time, driverless cars were able to compete at the Formula Student race, which shows that the young talents also face the current trends and challenges in the automotive industry. As a result, three different competitions were held this year: Formula Student Combustion (FSC), Formula Student Electric (FSE) and Formula Student Driverless (FSD). Roughly 4000 students involved in teams were curious to see whether the development effort of an entire year paid off.

The great number of teams from across the globe who manage to build race cars during their studies – on an almost professional level, no less – never ceases to impress us. As we strongly encourage the students’ dedication, we provide support to the teams. For a long time, IPG Automotive has supplied the teams entering the competition with licenses for virtual test driving. Using CarMaker and IPGKinematics, students benefit from virtual testing during the development stage of their vehicles. Testing that which doesn’t yet exist – CarMaker makes it possible.

We know our stuff: Six of our colleagues were part of Formula Student teams during their studies. As they maintain these ties, we know of the challenges the teams need to face. Several of our colleagues were on-site on the weekend of the race. To see the latest technical developments in real is always really exciting. But one thing holds true for all competitions: There can only be one winner. Or three.

The team of Esslingen University of Applied Sciences won the FSC class. The overall victory in FSE went to the University of Stuttgart. In Formula Student Driverless, only six teams passed the technical inspection, with ETH Zurich winning the competition. It is safe to say that many more teams will face the challenges of vehicle development connected to the new technologies next year. But back to the starting line: Once again, university teams have ample time to prepare for Formula Student 2018. 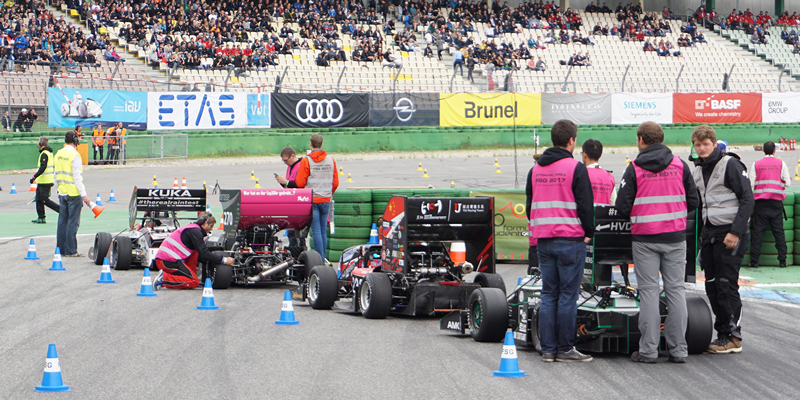 Everyone wants to win...